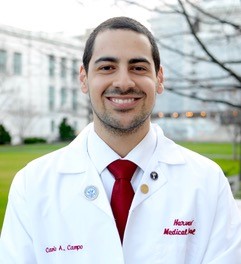 Camilo Campo first joined LIRP as a UW-Madison undergraduate student in 2013. After graduating in 2015, he continued on as an Associate Research Specialist for a year. During his time with LIRP, he worked on several projects spanning the areas of 4D flow MRI for portal hypertension, quantitative MRI biomarkers of hepatic steatosis and iron overload, and the validation of MR contrast agents.

In the fall of 2016, he enrolled at Harvard Medical School, where he is currently a 4th year medical student. During his time in medical school, he has continued his involvement in radiology research. He is currently working in the Division of Emergency Radiology at Brigham and Women’s Hospital, investigating the value of renal ultrasound as the initial imaging test for urolithiasis as well as projects assessing the emergency imaging applications of dual-energy CT.

This fall, he will be applying to become a resident in Diagnostic Radiology.